If the Indonesian leadership continues to demonstrate deft handling of its international relations and manages to avoid a major economic recoil, there is an opportunity for it to play a more formidable role on the global stage, according to Stephen Olson

By virtue of its extremely large domestic market, low labour costs, impressive growth, expanding middle class, and preferential access to ASEAN and China, Indonesia has become a highly significant market in its own right, a logical springboard into China, and a leader amongst it ASEAN brethren

With its steadily increasing economic might and strategic influence, the Southeast Asian island archipelago of Indonesia has moved itself front and centre on the global stage. Indonesia’s hosting of this year’s Asia Pacific Economic Council (APEC) forum was hailed by the leader of at least one Asia Pacific country in attendance for producing the “best APEC” meeting ever. And with Chinese President Xi capitalising effectively on the absence of his American counterpart, the meeting garnered worldwide headlines and attention for the commentary it provided on the US and Chinese competition for influence in the Asia Pacific.

Emerging markets from Latin America to Southeast Asia breathed an audible sigh of relief when the US Federal Reserve – contrary to most market expectations – refrained from initiating its much anticipated policy of "tapering" at its last FOMC meeting in September. Tapering would have in essence signaled the beginning of the end for the Fed's extraordinary and unprecedented stimulative effort known as Quantitative Easing. Through its monthly purchases of $85 billion in securities, the Fed has been pumping massive amounts of capital into the economy and keeping interest rates near zero – all in effort to spur economic activity in the sluggish post-global financial crisis environment.

The implications of QE, however, have been felt far beyond the shores of the US. Much of the capital pumped out by the Federal Reserve has ended up in emerging markets, in search of higher rates of return. Equity markets and various asset classes – real estate, in particular – have surged, especially in key growth markets in Southeast Asia. "Easy money" from the US has funded everything from condo developments and shopping malls, to generous government programs paid for with a credit card.

Tapering would mean that this "easy money party" would soon be winding down. Indeed, even the mere prospect of tapering, as hinted at by Fed Chairman Ben Bernanke in May, was enough to cause equity markets and currency valuations in many emerging markets to swoon over the summer, as capital retreated back to the US in anticipation of higher interest rates.

US Influence in Asia Begins at Home

President Obama's decision to cancel his scheduled trip to Asia to attend the APEC meetings in Indonesia, along with side trips to Brunei, Malaysia and the Philippines has caused tremendous consternation and hand-wringing on both sides of the Pacific amongst those who value strong US "influence" and "commitment" in the region.

Indeed, President Obama's absence does represent to at least some extent a missed opportunity to advance the US economic and strategic agenda in the region, and is certainly a disaster in terms of the bumbling image it projects of a dysfunctional US Government, unable to keep its own house in order -- let alone exercise any meaningful degree of influence abroad.

But all of this hubbub misses the essential point: The greatest threat to US influence in Asia is not a missed meeting in Bali. The real threat is a lackluster US economy, losing its competitive and innovative edge.

US "influence" – in whatever particular sense or meaning that word is bandied about – always has and always will be a function of the strength and innovative vitality of the US economy, and the concomitant credibility of its underlying economic philosophies – NOT the travel schedule of the US President.

ASEAN's appetite for pursuing a variety of regional or bilateral free trade agreements continues unabated. Negotiations on the ASEAN Economic Community 2015 continue to move forward, as does work on the Regional Comprehensive Economic Partnership, which brings together ASEAN with China, Japan, South Korea, India, Australia, and New Zealand. Several ASEAN members have joined, or are considering joining, the Trans-Pacific Partnership (TPP), and most ASEAN members have one or more bilateral FTAs in place. Thailand, for example, is in the process of negotiating an FTA with the EU.

Of course, legitimate questions can be raised over the extent to which these agreements will actually produce anything approaching true free trade. ASEAN's preference for voluntary compliance and less-than-stringent monitoring and enforcement – to say nothing of the wide discrepancies in development levels amongst ASEAN members -- means that a variety of barriers and restrictions are likely to remain in place. Realistically speaking, one should not expect to see an actual "economic community" in ASEAN any time in the foreseeable future.

But setting aside that issue, it is safe to say that we will see some level of progress towards greater trade and investment liberalization and regional integration. The stage will be set – at least in theory – for trade within ASEAN (and beyond) to continue to expand.

In Asia, Locals Rise Only So Far at Western Firms

HONG KONG—As Western multinationals ratchet up their operations in Asia, there is one glaring omission from the upper ranks of management: Asians.

Asians are employed by multinationals in greater numbers than ever before at lower levels, but when it comes to the top roles, companies from food to finance tend to pick Westerners. 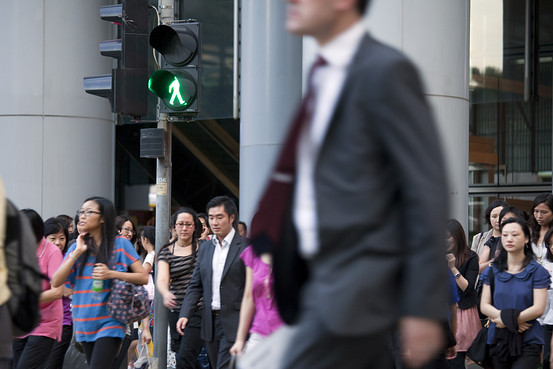 According to Spencer Stuart, the recruiting firm, 40% more Westerners are placed in CEO-type roles in Asia compared with other roles. Bloomberg News