Are China and the EU on a collision course?

The future of the EU–China trade relationship — one of the largest in the world — will be substantially impacted by a debate over whether China should be granted 'market economy status' (MES) this year. Under the terms of China's 'Protocol of Accession' to the World Trade Organization, WTO members are allowed to treat China as a 'non-market economy' until December 2016. After that time — at least in the Chinese interpretation — WTO members are to accord China MES. 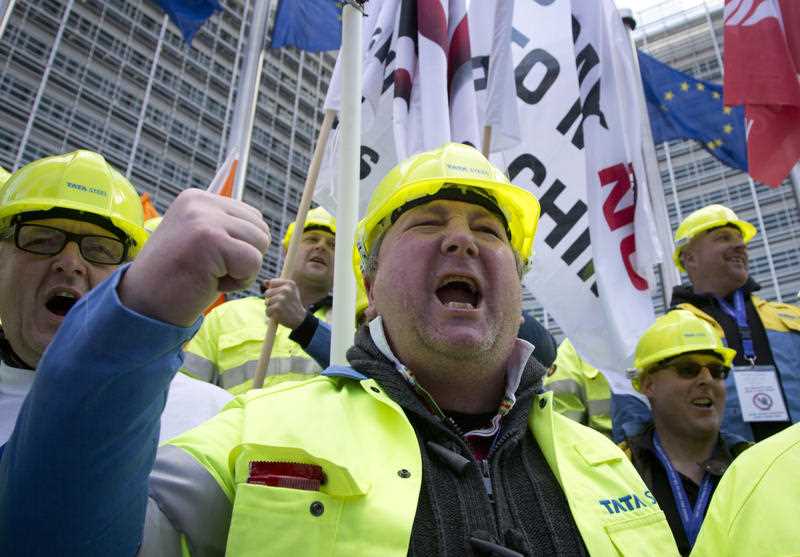 Steelworkers demonstrate China's potential MES status in front of the European Commission building in Brussels during a on 15 February 2016.

Why is this so important? If China is provided with MES, it will become more difficult for the EU (and other WTO members) to successfully employ anti-dumping laws in response to alleged unfair trade practices by China. Dumping essentially means that a country exports its products to another country at artificially low prices in order to gain a share in the market. Anti-dumping laws provide for the imposition of import duties to offset this price advantage.

The EU's decision on China's MES would be complex and would have a large impact under any circumstances. But, unfortunately, it has been further complicated — and the stakes raised even higher — as a result of surging Chinese steel exports to the EU.

Suffering from slowing growth and flagging demand at home, Chinese officials have employed a number of policies to help boost a variety of struggling industries, including steel, resulting in overcapacity. China now has a capacity surplus in iron and steel in excess of 400 million tonnes per annum. This is one of the reasons why steel exports rose by 20 per cent to a record level of 100 million tonnes in 2015.

Chinese officials have conceded that 'excessive allocation of resources' and 'unreasonable intervention' by local governments (which are eager to keep local factories humming) have made it difficult to trim excess industrial capacity. That excess capacity is now rolling ashore in the EU, at the precise time the MES issue is being considered.

How high are the economic stakes for the EU? A recent study by the Economic Policy Institute in Washington estimates that — across all countries and all sectors — between 1.7 million and 3.5 million jobs in the EU could be put at risk as a result of granting China MES status.

Labour groups representing the steel industry have poured into the streets of Brussels, arguing vociferously against granting China MES, and instead arguing for the imposition of anti-dumping duties. China, for its part, has maintained its stance that it believes the WTO agreement requires the EU to grant it MES by the end of the year, and that it fully expects the EU to honour this agreement.

It is in this highly charged atmosphere that the EU must make its decision, and both the EU and China must find a way to steer their trade relationship through these rough waters.

For the EU, the threshold issue is to reach a credible legal decision on whether or not the terms of the WTO agreement require that China be granted MES by the end of 2016, or if there is scope for any other outcomes or conclusions. This is a determination that needs to be based on the facts and the merits of the case — not on the basis of slogans shouted by street protesters.

The lawyers are continuing to argue over this. To withhold MES, if it is in fact required by the WTO agreement, would send the message that countries are free to break trade agreements when it suits their domestic needs. The long-term damage of such a message would be far greater than any short term gains — especially since the West has been preaching to China for decades about the benefits of 'playing by the rules'.

Granting China MES would not prevent the EU from pursuing anti-dumping cases — it simply makes it more challenging. But if any complaints against China are in fact legitimate, then there is no reason why they can't be successfully addressed through anti-dumping measures. Granting MES is not tantamount to unilateral disarmament.

China, for its part, needs to recognise that it has become a deeply consequential member of the global trading system. The days when China could pursue domestic policy objectives without regard for their impact beyond the border are long gone. China is simply too large and too important, and irrespective of whether it sought the responsibilities of trade leadership, those responsibilities accrue to countries that have benefited the most from trade.

While China is as entitled as any other country to pursue domestic policy objectives, policy decisions will now need to be considered in a broader international context. It should not have been difficult to anticipate the likelihood that excess steel capacity — bolstered by government assistance — would end up in export markets and provoke charges of dumping.

And it would have been naïve not to expect the MES issue — with millions of jobs potentially hanging in the balance — to become heavily politicised under such circumstances. Chinese policymakers will have to show a greater sensitivity to these realities than they have in the past.

So, where does all this leave us? Although the situation is undeniably precarious, there is still room for creative and enlightened leaders on both sides to forge a path forward that reasonably reflects domestic objectives without threatening the fabric of their shared and mutually beneficial trading relationship. China and the EU do not necessarily need to be on a collision course over granting China MES. Now is a time for cool heads and long-term perspectives. We should all wish them luck — the reverberations of their decisions will likely be felt in every corner of the world.